While Scientology does not have charitable status in the UK, its front group Narconon does However, Narconon UK, however, is a very different organisation to its US counterpart.

To maintain charitable status a charity’s aims, activities and accounts  must be made public. All of this information (and more) is published online. Now that you know the registered charity number, you can access the details of Narconon’s (official) UK activities by:

The following is an overview of Narconon UK using information provided by the Charity Commission and other sources.

The Charitable Purpose of Narconon UK

The official charitable purpose of Narconon is as follows:

A) TO REFORM AND REHABILITATE PERSONS WHO ARE FOR THE TIME BEING OR WHO HAVE AT ANY TIME BEEN DRUG ADDICTS.

(B) TO ASSIST IN THE REFORMATION AND REHABILITATION OF PERSONS WHO HAVE AT ANY TIME BEEN CONVICTED (WHETHER IN THE UNITED KINGDOM OR ELSEWHERE) OF ANY CRIME.

(C) TO ADVANCE THE EDUCATION OF THE PUBLIC AND/OR PERSONS WHO ARE OR HAVE BEEN DEPENDENT UPON OR AFFECTED BY THE USE OF DRUGS ABOUT ALL MATTERS RELATING TO DRUG ABUSE/ADDICTION IN PARTICULAR BY THE PROVISION OF ADVICE, INFORMATION AND SUPPORT.

This seems to be deliberately vague so as  to leave the door open for the ‘charity’ to open US style residential facilities if that ever became feasible. Also, section (B) could be used to justify operating as ‘Criminon‘ yet another Scientology front group which claims to rehabilitate offenders.

As the Narconon and Criminon programmes  are both indistinguishable from Scientology practice this would potentially provide another income stream.

The Declared Activities of Narconon UK

These can be examined in detail by going to the website of the charity commission  (enter 267386 in the text box titled ‘Charity Search’ on the bottom left of the page for Narconon UK). The ‘Financial Summary’ box at the bottom of the page contains text links to yearly accounts which all include a trustees report.

The trustees report for 2011 is the latest available as Narconon’s accounts are typically submitted late (102 days late in this case – an amazing 144 days late in 2008).

This report suggests that the organisations activities have been confined to presentations in schools,

The main object in the year was to provide a preventative education service to schools and other public bodies” […] We have not reached over 1/4 million students and teachers in the UK with “The Truth About Drugs”. I think it can be safely said that we have contributed to the fall of drug abuse in no small way.

Readers may disagree with this conclusion when they learn more about the content of these presentations. 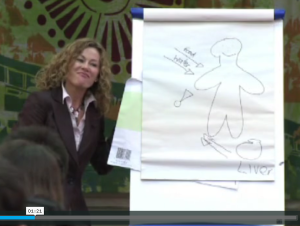 Narconon UK present their activities in schools in the this video on the sharing site Vimeo.  Significantly, comments have been disabled.

They claim that Schools  repeatedly rebook their presentations. However, most of the video is taken up by unconvincing  recommendations from people  identified only as  “*PHSE Teacher, London”, “*PHSE Teacher, Midlands” and “Former Headmistress, Sussex”. Neither names nor schools are provided.

You would think that, if the programme was so good, more time would be spent describing it – and the people who recommended it would at least use their own names and be authorised to speak on behalf of their schools.

Later there are interviews with people who underwent the programme – and a dead giveaway  at 05:08  – an interviewee says, “Having the data about drugs and all the different ways they can affect you [..] I’m so glad to have been part of that lecture and have that data”.

In the jargon of Scientology the word ‘data’ is often used instead of ‘information’ –  leading to the suspicion that all of the people who are recommending the programme are, in fact, associated with Scientology-run schools. 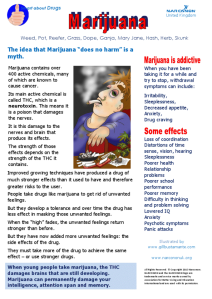 The materials used in presentations to Schools seem to be adapted from those provided by a  Scientology front group called “Foundation for a Drug-free world.” Their “Educators Guide” (which can be downloaded here) is probably the basis for Narconon UK’s presentations.

There is also a variety of leaflets and posters which can be downloaded here.

The style and content are  unimpressive. The writers  concentrate on facts and figures (many of which are simply wrong). This is counter-productive.  If the target audience knows more about the subject  than you do, they are unlikely to take you seriously – and Narconon may succeed only in damaging the credibility of legitimate efforts

Also, they fail to address the social factors which motivate drug use and do not provide realistic strategies for resisting social influence. For an example of the approach favoured by academic research in the UK, take a look at the website, “Talk to Frank”

The Narconon  leaflet, “The Truth about Ritalin Abuse”  is particularly bad, making unsupportable claims about both the over-prescription of Ritalin and its abuse. For example it falsely claims that an incredible 20% of US students have abused this medication.

This hostility to Ritalin is due to the fact that Narconon’s in Scientology – and Scientology is hostile to psychiatry and psychiatric medication because  L Ron Hubbard saw them as a rival, first to his self-help scheme Dianetics, and then to Scientology. For example, in 1966 he wrote:

A psychiatrist today has the power to (1) take a fancy to a woman (2) lead her to take wild treatment as a joke (3) drug and shock her to temporary insanity (4) incarnate [sic] her (5) use her sexually (6) sterilise her to prevent conception (7) kill her by a brain operation to prevent disclosure. And all with no fear of reprisal. Yet it is rape and murder… We want at least one bad mark on every psychiatrist in England, a murder, an assault, or a rape or more than one… This is Project Psychiatry. We will remove them.”
– L. Ron Hubbard, Sec ED, Office of LRH, Confidential, 22 February 1966, “Project Psychiatry”

He embarked early on a sustained paranoid vendetta against medicine in general and psychiatry in particular which is still persecuted by the Church of Scientology. Consequently, the ‘anti-drug’ stance of the Church of Scientology (and Narconon) is not confined to drugs of abuse, but extends to medicinal drugs – not only Ritalin but also anti-depressant medication and even drugs to control epilepsy.

An excellent example of the unreliability of  the school presentations (and Hubbard’s ‘research’) is in described in the Narconon UK website – section four of the presentation given in secondary schools (to children of 13 upwards). This reads:

For most attendees this section is a real eye opener. Narconon Drug Education’s research has proved conclusively that residues of drugs remain in the fatty tissues and can stay there indefinitely, affecting a person for years afterwards.

This it is totally false. Drugs are, by their very nature highly reactive substances. They are all rapidly metabolised by the body and are undetectable in body tissues after less than a month.

Narconon’s claim is based on L Ron Hubbard’s book “Clear Body, Clear Mind” in which he lays out the 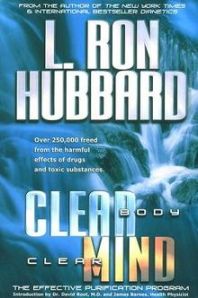 purification rundown. Although Hubbard constantly asserts that he has proven, after extensive research, that drugs and toxins are stored in fatty tissue, he provides no references, and his ‘research’ is both unpublished and unavailable

Nevertheless this idea is treated as fact by the  “Narconon Drug Education UK” site and in their video (at 2:02).

Of course, Scientologists consider Hubbard to be essentially infallible – even when he contradicts the conclusions of scientific medicine. This is telling evidence that Narconon is simply Scientology in disguise.

Such false information is potentially harmful, as it could create considerable anxiety in the mind of a young person who, for example,  dabbled with cannabis (or was just near people who did) and may live in fear of this being ‘detected’ for years.

Planting this false belief also facilitates Scientology recruitment  who can offer the  ‘purification rundown‘ to people who have been primed to believe in (non-existent) ‘drug residues’.

In some cases this same material has been presented in primary schools (for children of ages 6 – 10). In this case parents showed far better judgement about the material presented and greater awareness of the fact that Narconon is a front group for Scientology.

In the US Narconon operates a  lucrative networks of paid residential ‘drug rehabilitation’ facilities throughout the country. These not only apply the ‘purification rundown‘  but also Scientology ‘training routines – it is, in fact Scientology by another name. Narconon in the US  is presently under intense legal pressure after four people died in the care of the headquarters facility, raids following allegations of medical insurance fraud and a legal action alleging that Scientology facilities falsely claimed to have credentials in drug treatment.

In the UK, medical detoxification and psychiatric support for drug users is provided at no cost by the state. National Health Service (NHS) hospitals provide a high standard of medical care, and private facilities are heavily regulated. The approach used by Narconon in the US is simply not viable here.

On the surface, Narconon UK only exists to provide a questionable ‘educational’ programme. However, it’s constitution is carefully written so that it could roll out a US style programme if conditions changed, or if they discovered a means to promote their regime in another way.

The Future of Narconon in the UK

There is disturbing evidence that the Church of Scientology is beginning to develop a new method of promoting its discredited and dangerous ideas about drug rehabilitation in the UK, which I will examine in part two of this series.

3 thoughts on “Narconon in the UK – Part One”