The first thing that new Scientologists do is a series of ‘Training Routines’ (TRs), and in an earlier post, we saw video demonstrations of ‘TRs’ by two ex-Scientologists.

In one Training Routine (TR-0) two people sit and stare at each other until they can do this without moving for more than two hours. ‘Learning’ how to do this can take much longer.

Unsurprising, this practice has strange psychological consequences – for example, participants  commonly experience vivid hallucinations, and there is good evidence to suspect that they also enter a state of elevated suggestibility.

Early critics of Scientology viewed this practices as a form of hypnotic induction, and  L Ron Hubbard claimed, in his ‘lectures’ and elsewhere, to be an expert hypnotist. Over the years, this explanation has been used (not always coherently) to explain the altered states of consciousness experienced during TRs (and many other aspects of Scientology practice).

This idea has its points – but I would like to propose an concept which I think is a much better fit  (at least for the TRs) –  the Ganzfeld Effect. In this post, I will try to explain what it is, and show how it explains the experiences people have when doing their TRs.

This takes place when any of a persons senses are deprived of changing stimulus – for example, by wearing goggles that limit your sight to a completely featureless visual field.

Humans are used to complex and constantly changing visual input, so when it suddenly ceases strange things can happen. Starved of input,  your brain picks up on its own internal electrical noise and tries to interpret it – a process similar to dreaming. The result can be vivid hallucinations (including ‘out-of-body experiences’).

For example, the Sociologist William Simms Bainbridge joined a Scientology Org, and practised training routines as part of an exercise in participant observation. His experience, and the experience that his partner reported, are common.

TR-0 could also produce an altered state of consciousness. One time I did it with a young man from Kentucky, an English teacher I happened to like. We sat staring at each other for two hours, which is 120 minutes, which is 7,200 seconds. A long time to stare into someone’s face, allowed to breathe and blink occasionally, but never look away, never smile or fidget. Afterward my partner exclaimed excitedly that he had seen me change before his very eyes! I had become different persons — a savage with a bone through my nose, then a decayed corpse covered with filth and cobwebs. He was sure these were glimpses of my previous incarnations. Everyone […] was pleased and complimented him on his perceptions. His interpretations fitted the cult’s ideology exactly.

I did not tell him what I had seen. He, too, had changed. A halo of light had grown around his face. He had become pale and two-dimensional, shimmering, covered with dark spots. Of course, I interpreted what I saw as simple eye fatigue. He and I had experienced the same stimuli but understood them differently. Unusual experiences like his, perceived within the definitions provided by the cult, are powerful conversion mechanisms.

Training Routines and The Ganzfeld Effect

These experiences occur because the training routines exploit the Ganzfeld effect.

Instead of a completely featureless visual field, participants are limited to the same, very limited and unmoving, input (another person, staring right back at you) for long periods of time

However, the same hallucinogenic effect is  produced .

The Importance of Interpretation 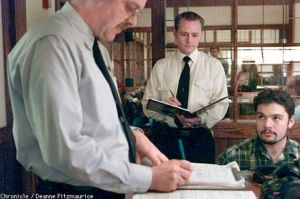 Like dreaming, hallucinatory experiences are individual and personal. They may be based on the random firing of neurons in the brain, but those patterns create different responses in each person, according to their memories, personalities, hopes and fears.

Some people may find their hallucinations frightening. Others will have a profound, even numinous, experience that appears to give them great insight into life, and their place in the universe.

When the experiences are positive, Scientologists are assured (with apparent authority) that this is a benefit of Scientology practice – which will encourage them into a deeper involvement and commitment.

In future, people will interpret their hallucinations in terms of Scientology and (since it is on their mind) even produce hallucinations with themes drawn from Scientology. This will become significant when they move on to the next stage of their ‘training’ – during auditing, they be expected to ‘experience’ previous lives.

Carefully framing the hallucination supports the proposition that Scientology ‘works’.

Unfortunately, habituation rapidly sets in. It becomes more difficult over to time to obtain these experiences, simply because you become used to the TRs.

One common explanation for this phenomenon among those who have left the Church is that Scientology practice has been corrupted by the new regime (under David Miscavige) and is no longer effective. They believe that this situation can be remedied by practising independently, and restoring what they perceive to be ‘the true faith’.

It is interesting that one of reasons that people continue to practice Scientology long after they have become disillusioned with the Church (and take up independent practice) is that their ‘mystic experience’ convinced them that there must be something of value  in Scientology.

People spend years in the Church, putting up with its abuse (or practising as an Independent Scientologist) in an effort to recapture those early ‘wins’. When you are sustained by such an objective it is easy for the power and depth of  fleeting visionary experiences to grow in memory. You justify your continued membership by unconsciously exaggerating the only benefit you have experienced.

Perhaps those early ‘wins’ weren’t so wonderful after all. They certainly seem difficult to describe, or explain. I have had a number of online conversations with Independent Scientologists who justify their continued faith in ‘the Tech’ (Scientology practice)  on the basis of their early ‘wins’. However, when they discuss these experiences, they may as well be describing a very satisfying dream. The only benefits they claim are vague and subjective.

Is There Anything to be Gained from Altered States of Consciousness?

The fact altered states can be produced on demand, by simple psychological techniques, does not necessarily devalue ‘mystic’ experiences. Life changing insights may be found in strange places.

However, I tend to think that Humans are social animals, who find themselves in their interactions with others not by navel-gazing. If you try to ‘find yourself’ in isolation  (as in the practice in Scientology TRs and Auditing) you may, one day, look within and find that there is nobody there.

The experience of Scientologists in this respect  is similar to that of historical religious mystics. In between intense numinous experiences, these people typically spent periods of years in deep despair, lamenting that their God had forsaken them.

The fact is they too used physical techniques to induce altered states of consciousness which they interpreted (according to their culture) as mystic experiences. With time, they became habituated, and it became increasingly difficult to enter an altered state.

These techniques included starvation, mortification of the flesh and (in the case of hermits who lived in caves) social isolation and sensory deprivation. Many of them sat  unmoving for hours and hours staring at a copy of the bible, or another holy object… which brings us full circle.

Closely related to the Ganzfeld effect is the practice of sensory deprivation – instead of presenting an unchanging stimulus, all sensory input is blocked. This tends to produce more extreme effects.

A popular means of creating sensory deprivation is a floatation tank (a device which has even featured in The Simpsons ).

This is a soundproofed, enclosed, tank of water. Additives have been used so that you naturally float near the surface (as in the dead sea).  It effectively reduces input from all of your senses to a very low level.

In sensitive individuals, even short stay in a sensory deprivation tank can give rise to

The positive and negative aspects of sensory deprivation have been explored in the BBC TV programme “Horizon”, which provides fascinating insights into the way in which Humans are naturally equipped to find meaning in random and meaningless events.
2008 | “Total Isolation”| BBC | Horizon | Watch Online | Download as .mp4