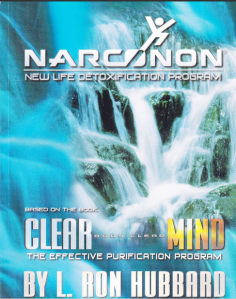 In the previous post in this series we completed our discussion of the first workbook given to clients of Narconon (a Scientology front group which offers paid drug rehabilitation services, and delivers Scientology training instead).

This workbook taught clients how to perform a series of ‘training routines’ with a partner. The content was, for all practical practices, identical to the first two Scientology courses – the “Success through Communications Course” and the “Hubbard Qualified Scientologist Course.” Neither have any relevance to drug rehabilitation.

Narconon clients will now be subjected to another Scientology practice – the “Purification Rundown”. This is described on the ‘picture book’ version of “Clear Body Clear Mind” which seems to be effectively the same as the  second workbook.

Before we examine the content of this book, we have to get past an enhanced disclaimer, more ‘Study Tech’ and an introduction by Gene Denk MD. There is a lot more this than meets the eye.

In the first few pages, we see that, like the other Narconon books, this one is published by ABLE – an umbrella organisation that functions to keep Scientology front groups at one remove from the Church itself. This insures that there is no mention of the Church of Scientology in Narconon literature.

We also find that the disclaimer used in the previous workbook (which is repeated in the first paragraph, below) has been significantly enhanced. 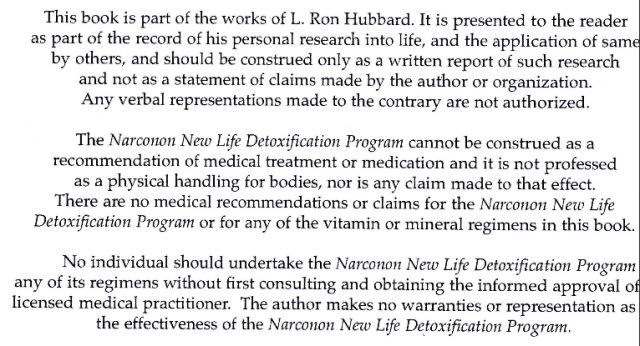 Pg 4 (Note: page numbers are taken from .pdf reader program, not the text).

It seems very strange that a drug rehabilitation organisation which claims a 70 – 80% success rate elsewhere in its literature should be so careful to establish (in the small print) that it makes no medical claims whatsoever for the effectiveness of one of its central ‘treatments’. Extraordinary claims are certainly made in the text, as we shall see later.

On page 5, we come across another familiar feature of Narconon workbooks. A firm statement based on L Ron Hubbard’s ‘study tech’. This will be taught in the Narconon workbook after this one (book 3).  ‘Study Tech’ is based on the simplistic idea that the only reason a person abandons a study is that they went past a word they did not understand. This text states,

[This is] the most important fact in the whole subject of study. Every subject you have taken and abandoned has its words which you failed to get defined.

This belief has a number of strange consequences, one of which is that the text can never be wrong. If you do not understand something in L Ron Hubbard’s writings, this is not because it is false or incoherent – it is because you have gone past an misunderstood word.

On page 6, we come to a statement by Gene Denk MD.

Despite the enhanced disclaimer discussed above, Denk unambiguously claims that the Narconon programme is effective. In his support he quotes extensively from a paper by himself and colleagues which e claims was published in a scientific journal in September 1982 (page 6).

The journal is actually called “Medical Hypotheses” (plural) not “Medical Hypothesis” (singular). Also, I have searched the PubMed website for “An Evaluation of a Detoxification Program for Long-Term Stored Chemicals”, and it reports “No items found”.

A wider search reveals that Denk Shields and Burton did write a paper with a closely similar title which did appear in “Medical Hypotheses” in 1982 and can be found in the pubmed database.

Why Does The Narconon Book Get the Titles of Both the Journal and the Paper Wrong?

On pg6 of the Narconon book Denk supposedly discusses his paper. The content quoted in this discussion is unrelated to that of the 1982 paper above. It consists instead of standard claims made by Narconon. It seems possible that:

You can see for yourself, as the full text of Denk’s paper can be found on a website promoting the Narconon programme entitled, “The Road Out” |  (download as .pdf) |

This site is operated by Narconon and aimed at people with drug issues looking for a drug detox an rehabilitation programme. The paper is included to order to suggest that there is respectable scientific support for the Narconon programme.

I have come across the journal in which Denk’s 1982 paper was published before. In a previous post I examined an article published in “Medical Hypotheses in 2006, after checking a reference to a paper given by a Narconon website.

It emerged that “Medical Hypotheses” is not a conventional scientific journal. On it’s own website, it clearly states that,

Medical Hypotheses will publish papers which describe theories and ideas which have a great deal of observational support and some hypotheses where experimental support is yet fragmentary’. […] Medical Hypotheses […] exists today, to give novel, radical new ideas and speculations in medicine open-minded consideration, opening the field to radical hypotheses which would be rejected by most conventional journals.

In other words, this publication examines speculative theories which have little or no supporting evidence and “would be rejected by most conventional journals”. This is convenient for Narconon, because it allows them to counter the negative results that are reported in real scientific publications with ‘published research’ of their own – without having to provide any credible evidence.

Papers published in “Medical Hypotheses” were not peer-reviewed before 2010, so Narconon supporters had only to provide anecdotal ‘evidence’ in support of their programme and mention Hubbard’s ideas to secure publication. This is surely the only scientific forum in which this material would be published.

The Impact Factor of this journal (a numerical measure of its influence based on the number of times its articles are cited by other publications) is exceptionally low, at only 1.152 This suggests that papers published “Medical Hypotheses” are considered to be worthless by the medical research community.

This is borne out by Wikipedia’s report that,

The publication of papers on AIDS denialism led to calls to remove “Medical Hypotheses”from PubMed, the prestigious United States National Library of Medicine online journal database. Following the AIDS papers controversy, Elsevier forced a change in the journal’s leadership. In June 2010, Elsevier announced that “Submitted manuscripts will be reviewed by the Editor and external reviewers to ensure their scientific merit”.

Detailed references are provided in the linked Wikipedia article.

Denk’s work was supposedly published in 1982, and other (Scientology sponsored) publications appeared in “Medical Hypotheses” in 2006 – before the new, stricter, regime was put in place.

A Conflict of Interest

Finally, all the papers mentioned above were sponsored by “The  Foundation for Advancements in Science and Education” This is yet another Scientology front group. It was established in 1981 to

“[…] research the efficacy of and promote the works of L. Ron Hubbard in the solving of social problems; and to scientifically research and provide public information and education concerning the efficacy of other programs”Ref

In other words, it’s purpose is to produce research which confirms that Scientology practices work, not scientific truth.

I may examine the paper on “The Road Out” in another post (not part of this series). However, for now I think that I have established a clear pattern.

When the papers discussed were published in “Medical Hypotheses” that journal was so uncritical as to be worthless. Narconon exploited this failure to publish papers which suggested that there was some value to the Narconon regime. These papers would not have been published in respectable, peer-reviewed journals, as they did not meet the required standards of evidence and objectivity, nor did they offer valid experimental evidence. “Medical Hypotheses” got Narconon off the hook.

Vulnerable people who come upon Narconon literature and websites cannot be expected to know that these papers are worthless, or that they were:

Consequently, they may accept them as evidence that the Narconon programme is supported by scientific research when, in fact the opposite is the case.

In the next post in this series, I will begin to examine the “New Life Detoxification Program” as presented by Narconon.