This series of posts is nominally about dianetics and Scientology in “Astounding Science Fiction”. However, I could not resist including this book review from another pulp science fiction magazine, “Planet Stories“.

It discusses L Ron Hubbard’s book, “Dianetics: The Modern Science of Mental Health”. Hubbard’s book had been published in May 1950 and was was reviewed in “Planet Stories”by James Blish, who was an imaginative and well-respected science fiction writer.

It demonstrates, once again, how intelligent, capable people who took a scientific, sceptical view of the world, nevertheless somehow accepted the unsupported claims Hubbard made for his creation and embraced dianetics (a phenomenon that I have discussed in this post).

During this series, we have seen this happen to John W Campbell (the editor of “Astounding Science Fiction”) and, elsewhere in this blog, the author William Burroughs.

The reputation of  James Blish as a science fiction writer is based on a number of stories. The “Pantropy” series are based on the idea that, instead of terraforming  planets, human colonists will be genetically adapted to suit the conditions there. He is also noted for the novel “A Case of Conscience” the first convincing theological SF story. There are many others.

However, he is best know for a series of stories that were collected in  four volumes and become collectively known as “Cities in Flight“. An anti-gravity device allows whole cities to leave a dying Earth and travel the universe in search of work.

These books made Blish’s reputation as a ‘hard’ science fiction writer – that is someone interested in the influence of science and technology upon society,

This makes the question or why Blish apparently fell for dianetics all the more perplexing.

Dianetics: A Door to the Future 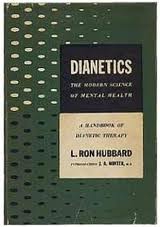 In the opening to his book review, entitled, “Dianetics: A Door to the Future”, Blish shows that he understands how extraordinary the claims that Hubbard makes for Dianetics in his book are:

Some of these claims are so flabbergasting as to stagger even the hardened science-fiction fan. For instance: Dianetics claims to have cured many kinds of heart ailment, arthritis, the common cold, stomach ulcers, sinus trouble, asthma and many other diseases, amounting to about 70% of the whole catalogue of human ills. Dianetics also claims to have cured virtually every form of mental disease.

[..] dianetics claims to be able to cure all of these aberrations and diseases every time, without fail. At the time this is being written […] dianetics has been tried on a minimum of 300 people and, its originators say has worked 100%, without failure in all these cases.

At this point, Blish looks as if he setting Hubbard up for a fall – preparing to ask, ‘and where is the evidence for all these claims?’ He even raise the stakes when he continues,

“Normal” people treated by dianetic therapy, it is said, undergo a rise in intelligence, efficiency and well-being averaging a third above their previous capacity! In one case, a woman, the IQ – Intelligence Quotient – rose 50 points before the full course of therapy was run!

The last line, incidentally, provides dianetics with an all-purpose excuse for failure which is diagnostic of pseudo-science. If it appears to work, this be held to prove that the the theory is true. If it fails to work, the ‘patient’ can be told that their disease has not been “caused by mental or emotional difficulties” so dianetics does not apply.  The ‘therapist’ can never be wrong.

Blish continues, but the promise of a well-deserved debunking suddenly fades away. It emerges that Blish, against all the odds, is taking dianetics seriously. He writes,

It might be a good idea to stop here and ask for the names of the people who are making these incredible claims. There are none of them they are none of them professional quacks, faith healers, bread-pill rollers or other forms of swindlers. They are all men with solid reputations.

Blish is making an appeal to authority – a classic logical fallacy. A person who has a good reputation can be wrong just as easily as anyone else. When they make a claim, all that really matters is the quality of  the evidence and supporting argument they present, not the probity of their lives.

Hubbard never, ever, presented any credible theory or evidence to support the claims he made for dianetics. He offered articles about it to academic journals concerned with psychology –  and they were simply rejected.  He never tried again Consequently there is no published evidence – only unsupported claims that evidence exists.

In this case, making an appeal to authority was an ill-advised tactic.

Blish goes on to describe L Ron Hubbard as “[…] an engineer” (as if this qualified him to construct a ‘theory of the mind) . Hubbard of course, took a course at George Washington University in Civil Engineering – and failed the first year. His transcript can be seen in the image on the right – click on it to see a larger version.

Hubbard was not an engineer. What’s more, the fact that he claimed a qualification he did not posses (and fooled Blish, among others) also showed that he did not deserve his ‘solid reputation’ either – he was, in fact, a swindler.

Blish goes on to describe the other two members of Hubbard’s inner circle – John W Campbell and Joseph E Winter MD, as if their good names would somehow make dianetics true.

Unfortunately Blish had an undeclared interest in establishing Campbell’s probity. He was a science fiction writer who published many stories in “Astounding Science Fiction” – the magazine which Campbell edited. The December 1950 issue of “Astounding” has just published “Bindlestiff” the second story in the series that was to grow into “Cities in Flight”. he would be taking his career into his hands if he said anything negative about Campbell.

What’s more, Blish worked closely with Campbell and could not have been completely unaware of the fact that, although Campbell had a degree in physics, he regularly fell prey to pseudo-scientific ideas and fringe political ideas.

Winters (who was a real doctor)  is the only person involved with dianetics who comes out of the debacle with honour. He quickly concluded that it’s techniques  were potentially dangerous, and resigned his post in the “Hubbard Dianetics Research Institute”. Subsequently, he wrote a critical book on the subject. His brief participation did, however, still lend credibility to dianetics at the time of writing.

It is ironic that Winters honesty – which Blish uses as ‘evidence’ for the truth of dianetics – would soon lead Winters to decisively reject Hubbard’s creation.

Hubbard’s book, however, does not contain any formal evidence for the claims. The Dianetics Institute in Elizabeth, N J is equally unwilling to offer authenticated case records or any other evidence of that specific kind.

Surely, now Blish will will see that dianetics as baseless? No. Instead, he takes refuge in another logical fallacy, anecdotal evidence. Hearing of a ‘miraculous healing’ due to dianetics in a New York hospital,

Jerome Bixby, editor of PLANET STORIES checked it. The claim was so; hospital authorities who have no connection with dianetics as a movement vouch for it, cautiously but definitely.

My own personal tests of the therapy on myself, may wife and a friend (namely Jerome Bixby)  – haven’t proceeded very far as yet. but as far as they’ve gone, they check with the claims.

Jerome Bixby was a professional editor and the author of the classic 1953 short story “It’s a Good Life,” which formed the basis of a 1961 “Twilight Zone” episode and a segment in  the 1983 film version. He was not medically qualified.

Just what claims Bixby “cautiously” verified, or how he verified it, is not made clear. We are invited to take a unqualified friend’s word for some extraordinary claims which, surely, require extraordinary evidence. Nevertheless, Blish concludes:

If dianetics does work  – and every check I have been able to run thus far indicates that it does – it may be the most important discovery of this or any other century. It will bring the long-sought “Rule of Reason to the problems of local and world politics, communications, law and almost every other field of human endeavour – the goal of a 3,000 year search.

The promise that an invention or technique will solve every human problem is a diagnostic sign of pseudo-science. The fact that Blish passed over the lack of evidence (even from the ‘institute’ which was supposed to be researching the subject) is telling. That he was prepared to consider Hubbard’s claims to be ‘verified’  from hearsay and subjective experience is conclusive. Like so many others, it seems that, for some reason, Blish wanted to believe, and suspended his critical faculties in order to accommodate this need.

Why Did Dianetics Appeal So Strongly to Some Science Fiction Authors (and Fans)?

The author L Sprague De Camp saw his truly sceptical articles and reviews published in “Astounding Science fiction” at the height of the dianetics fad. They did not criticise dianetics itself, but De Camp evidently did not fall for that, either.

In his 1975  article””El Ron and the City of Brass” he wondered at the way in which John Campbell had accepted dianetics so uncritically and promoted it in his magazine “Astounding Science Fiction”. He wrote,

Campbell, a brilliant man with a scientific education who became the greatest of all science-fiction magazine editors, had found active scientific research uncongenial and had made writing and editing his career. One can only speculate why, for many years, he lent himself to one unscientific or borderline idea after another. I suspect that. failing to become a famous scientist himself, he harbored the ambition to be at least the discoverer of such a scientist.

Perhaps this vulnerability could also explain the popularity of the dianetics fad among so many science fiction authors and fans.

They believed that science and technology could transform the world for the better. Although so many of the things that they discussed have come to pass, in one form or another, these prophets were not respected in their own country. In the 1950’s science fiction was still commonly dismissed as juvenile fantasy.

Also, science is a difficult subject and educational opportunities were rare in this period. Hubbard promised a group of scientific idealists that the future they wanted was right here, right now. What’s more, it was accessible to them through the purchase of a book.

He further assured them that could improve themselves and society with his ‘science’ without having to undergo years of difficult study in institutions they could not afford. They wanted to believe, and suspended their critical faculties accordingly.

James Blish was an intelligent and capable man. However, he did not (quite) complete his MA degree in literature and found himself  making a living writing for pulp fiction magazines instead. He earned an well-deserved reputation for his excellent science fiction, but it is tempting to see in him a frustrated literary academic, in the same way that Campbell was a frustrated physicist.

Perhaps Blish also saw dianetics as a way to achieve his real ambitions. If so, it was a great shame. The man may not have been able to work in the area to which he aspired – but it is doubtful if posterity would have celebrated James Blish, the obscure academic who specialised in Ezra Pound, as warmly as it does James Blish the classic science fiction author.