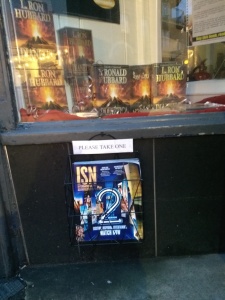 “Affinity” is billed as “The Magazine of the Church of Scientology of [insert location]” Almost the exact same magazine is sold to all UK Scientology orgs. The only difference is that the local orgs name is  at the top, and their contact details are in the text.

Sometimes, individual orgs get some locally relevant text invisibly inserted.  Issue 31 (published mid 2019) for example, gave interesting information about Plymouth Ideal Org, which I have examined in detail in an earlier post.  Issue 31 is included here in its entirety.

These were given away to the general public with the words “Please Take One”. They immediately struck me as an odd choice or promotional material. They are not aimed at the general public – the UK editions are written to encourage Scientologists to take further ‘courses’, and don’t mean very much at all to outsiders. The content of the US magazine is about events in the US and is given to committed Scientologists who have given money to become members of the International Association of Scientologists (IAS).

A likely reason for this is that head office sells literature to local orgs. This is printed at their own printing plant on the continent and economies of scale mean that they cost very little to produce. However, the orgs are required to buy them at near retail prices. This costs them a lot of money.

Plymouth Org recently  took delivery of a lot of expensive promotional material, including a sandwich board with interchangable inserts. This is used to  promote Scientology’s YouTube Channel. They are required to ‘disseminate’ but they can’t because the last time they tried, they were sanctioned by the local Council for selling copies of “Self Analysis” without a street trader’s licence and the Advertising Standards Authority for the unsupportable claims they made for that book.

The basket outside the org was their way of assuring head office that they were spreading the word. They likely didn’t mention the fact that they were doing so by giving away old magazines of no relevance to the general public, and hoarding the new stuff. They also offended against their own doctrine of “fair exchance”. This states that nothing should be given away, because this degrades both donor and recipient. Scientologists should only exchange goods and services of equal value.

2 thoughts on “Eight Recent Copies of Scientology’s “Affinity” Magazine Which Were Given to the Public – Why?”