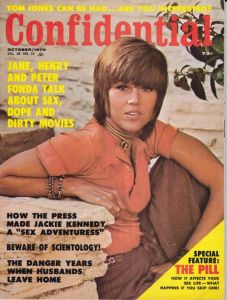 “Confidential” magazine was published continuously from December 1952 until 1978. It specialised in serious exposés and show-biz gossip (originally about cinema, latterly TV).

In this edition there were articles about Jane, Henry and Peter Fonda, Jackie Kennedy, a long article about the contraceptive pill and another about fashionable and flattering swimsuits (“Are You a Bathing Suit Patsy?”). It seems to have been aimed at a young female audience, and was presenting an edgy but  commercialised version of then fashionable counterculture themes.

The article about Scientology is the nearest this issue comes to real exposé journalism. The cover reads “Beware of Scientology” and the contents page, “Scientology can drive you out of your mind”. It’s not a puff piece.

If you can get past the hip style of the writing, it is an interesting take on the culture of Scientology ‘missions’ during this period (with a few good black-and-white photos). It also shows how the basic operation has hardly changed at all 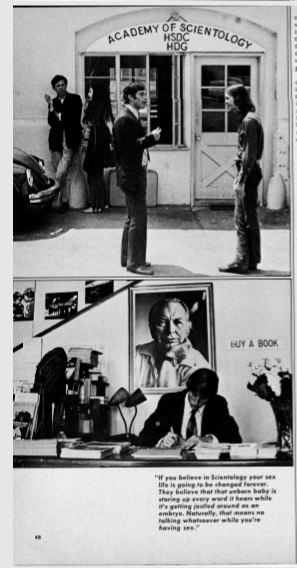 The story is written around the vist of a reporter to “the Celebrity Center in downtown Los Angeles” and a converataion with a man “in charge of a Mission of the Church of Scientology” – probably a mission holder.

It’s important to understand that”Missions” were a crucial part of Scientology’s business model back in 1970, when this article was published. They were a kind of franchise operation. ‘Mission holders’  paid a substantial fee for the right to promote and teach Scientology courses up to the state of ‘clear’.

80% of the gross income of a mission (consisting of the ‘fixed donations’ paid by ‘students’) went to the mission holders. The remainder was sent back to the organisation, which also sold  the missions books and tape recordings made by Hubbard, and e-meters (which were presented as essential to progress in Scientology).

Despite these expenses, mission holders could make substantial sums of money. This motivated them to pass students on to ‘Advanced Org’s to receive the deadly secret ‘advanced’ teachings of Scientology. The further you ‘progress’ in Scientology the higher the fees become. When you embark on the OT levels you can be paying thousands of dollars an hours for ‘services’.

This arrangement worked well for Scientology for years. The highly motivated mission holders risked their own money and provided a constant stream of well-indoctrinated individuals to ‘advanced courses’ all over the world.

Scientology only received only about 20% of the money taken by the missions – but >20% of a lot is better than 100% of nothing. What’s more, the people who came to the Church of Scientology proper for ‘advanced’ courses had been made complaint and well-indoctrinated. They believed in the value of Scientology and would typically be depended on to pay the huge sums of money required.

Owning a mission was very lucrative during this period, and Hubbard also benefited from a constant flow of recruits to the most expensive courses, which he reserved to his organisation. It was a good deal for both parties.

Also, the missions were more laissez faire than the orgs. There job was to draw people in, and did so with a less disciplined, doctrinaire approach than is associated with Scientology today. As this article suggests there was also a social aspect  – a diverse group of mostly young people were mixing together, exploring past lives and relationships with each other against the background of the ‘sexual revolution’.

In his book “From Slogans to Mantras” Sociologist Stephen Kent agues that new religious movements  like Scientology mushroomed during the 60’s (and triggered a popular moral panic)  because:

In other words, many idealistic young people looking for a mission in life migrated from politics to organisations like Scientology. This brought about a golden age for Scientology.

The warnings about Scientology in this article must have come as a shock.