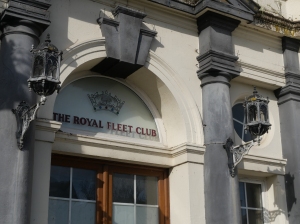 I visited the Plymouth Ideal Org building today, and all of the plant and equipment that was being used to remove asbestos-containing material (as per planning requirements) is now gone, as are all the statutory warning signs.

When asbestos removal is complete the site generally has to be left in a sealed condition for some time in order to (quite literally) allow the dust  to settle. Then, independent officials test and assess asbestos levels in the air. If they are below a set threshold, the site is cleared for development.

Consequenly, I expect nothing happen for weeks or months – and then the real bulding work can commence.

Also, I commit myself to the prediction that Scientology is aiming to (finally) complete this project by September/October 2020. The images confirming that phase one is complete, and my rationale for this theory appear after the break. 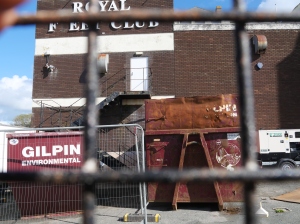 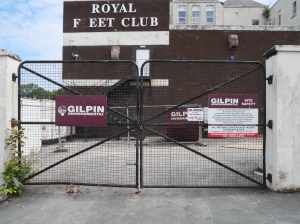 This project has been underway since July 2019.

Suites of rooms seem to have been sealed off with plastic, one at a time, and ventilated through filters while  the asbestos-containing material was removed in sealed bags. Since this may include textured paint wall and ceiling board that was likely to take some time to do properly and safely.

The contractor has now had sufficient time to gut the interior, and this preparatory work does now seems to be complete.

The temporary ventilation conduits, which were relocacted as the workers progressed through the building are now gone too, and the areas they were put through made good, confiming completion.

It should be noted that asbestos-containing materials, like textured paints and ceiling board are not considered to be as dangerous as raw asbestos because they are encapsulated in other material, not present as fine asbestos dust. While the standards for disposal of these materials are high, work on removing them can proceed at a more rapid pace, and confirmation of decontamination does not take as long either.

Now that the specialised equipment is gone, it’s likely that visible renovation work will soon commence on the fabric of the building . Here are the  images, taken today, which confirm that all equipment is gone from the secure area.

I’m betting it will. Now that the asbestos removal phase is over, visible progress can be made. 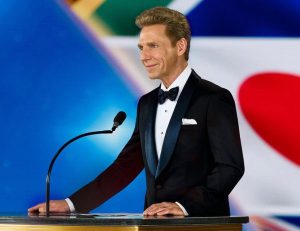 When Scientology decides to push an Ideal Org renovation through in the UK, it’s typically done in record time – with expensive overtime to complete the job to a tight deadline.

The only thing that might have been holding this race to the finish back is the theory that David Miscavige, the present ‘leader’ of Scientology may have gone into hiding to avoid being served with summons to appear in court.

However, he has recently been served with those documents in the US by alternative means. At the time, he was in the UK, where he made a speech at the annual gala of the International Association of Scientologists held at Scientologys  UK headquarters, Saint Hill Manor in East Grinstead.

He’s not in hiding, then.

Since then, two American Ideal Orgs have announced the date of their ‘grand openings’, so it looks as if the Ideal org show is back on the road.

When Will Pymouth Ideal Org Open, Then?

Scientology, and Miscavige personally, will soon come under unprecedented legal pressure. They need a lot of positive PR

This will not be aimed at the general public. They are a lost cause, which Scientology has distanced themselves from. Instead of stopping people on the street, members now promote their cable TV channel. This distances the dwindling numbers of ordinary members from the indifference (and sometime hostility) of the public. They need positive PR so that their own people don’t become disillusioned.

On the 6th of September 1620, the Mayflower departed Plymouth on a 66-day voyage to the New World. It’s an iconic event in US history and, 400 years later, all through 2020,  it’s going to be commemorated in the UK. It’s already being promoted in Plymouth. 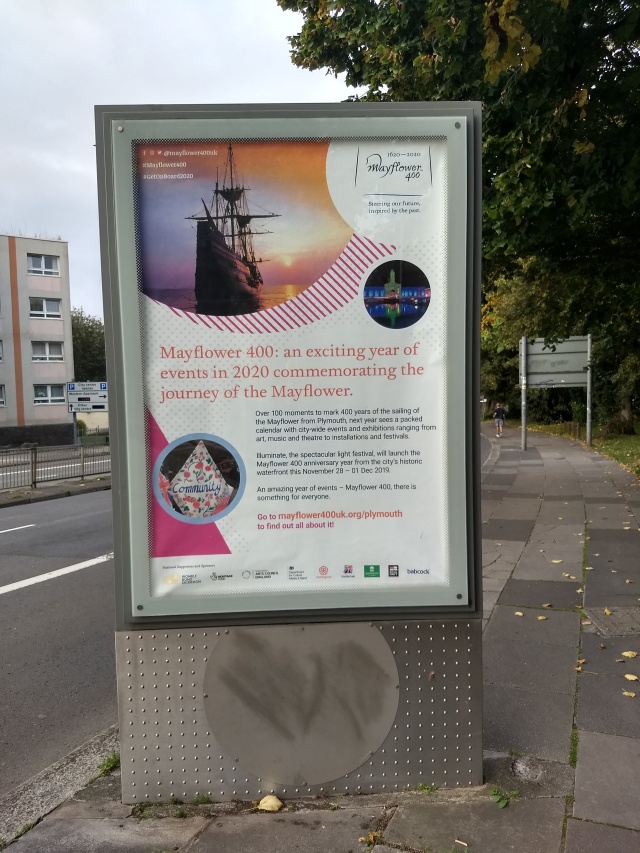 The IAS event (mentioned above) typically takes place in October. While Miscavige was here for that event in 2017 he took the opportunity to open the Ideal orgs in Firhouse (in the Republic of Ireland) and Birmingham in England.

It’s quite possible to have Plymouth Ideal Org ready for opening around September/October 2020 and a date close to the departure of the Mayflower would provide David Miscavige with a rousing speech on the theme of ‘religious freedom’ that would be recorded and distributed to Scientologists worldwide, and used in Scientology propaganda.

This is just the kind of opportunity that might appeal to him. It’s no surprise that the local Church of Scientology  made a video promoting that connection some time ago

The only fact telling against this theory is the possibility that work in behind schedule. The City Council granted Scientology permission to close the lane behind the building from the 26th of August 2019 until September 2020 for site safety reasons. Since first writing this post, I’ve been back to the site, and can confirm that this road has not been closed as of the 23rd of December.

I think it’s more likely that Scientology’s agents applied for much more time than they thought they would need, in order to be on the safe side – and it would be convenient to have that road closed on September the 6th 2020. You see it’s a public road, probably it’s right up against the wall around the Royal Dockyard which needs to keep buildings at a distance for security purposes – protesters could not be excluded from it without another closure order.

Permission to close the road was granted for the purpose of site safety during renovation. Another  inteneded to prevent the public from seeing an Ideal Org ‘Grand Opening’ would be less likely to be granted (especially since nearby residents are likely to object) so Scientology could just exploit the one that they already have.

How Will the Opening of the New Org be Handled?

The Plymouth site is a difficult one for the kind of ‘grand opening that Miscavige demands. These events requires a  lot of room. He needs to accomodate a bussed in crowd, a boom camera, lighting, huge video displays and more (see the two links above).

That’s going to be difficult, because the org does not have any outdoor defensible space (see this video survey of the site). Scientology would have to obtain permission to cordon off a large area of public space for the occasion – and sight -screen it. David Miscavige does not like onlookers. However, when he wants something done, a lot of money and effort are put into making ‘command intention’ come about. A way might be found.

So… here’s my prediction – Work on Plymouth Ideal Org will resume in 2020, with a planned September / October opening. Miscavige might even bring the IAS event forward to September so that he can hold the Ideal Org opening on the magic date when the Mayflower departed – September the 6th.

Watch this space, if only to see me come unstuck 🙂

The asbestos removal was completed by a reputable contractor, so it will almost certainly pass first time. All we can do now is watch and wait for the building to be declared safe. Since first writing this post on the 27th of October,  I have made several return visits and can report that, as of the 10th of January 2020, nothing has visibly changed.

However,  the professional building contractors typically retained by Scientology should still be able to complete a renovation by September / October 2020 if they start even moderately early in the New Year. They have a months in hand, still.

Ideal orgs are typically completed in a last-minute rush. This is possibly deliberate, in order to minimise exposure to scrutiny. If I am right about Scientology’s  plans to exploit the “Mayflower” commemoration, it will be a race to the finish from the point that the building contractors return.