Urban Explorers are people who enter abandoned buildings and take a look around. These places include bunkers, hospitals, factories and other derelict locations of general interest. They are driven by curiosity and often historical interest. Their ethos is to do no damage and take away only images.

Thanks to the quirks of UK law, what they do is not a criminal offence. I explain the reasons why in detail after the break, because I would not want to associate myself with any illegal activity.

The group we will meet in a moment actually publish video of their explorations on a YouTube channel.

Without doing any damage (that’s critical in law) urban explorers have gained entry to the Royal Fleet Club. This  is the building that was bought by the Church of Scientology in 2010 to be renovated and become an ‘Ideal Org’ (Scientology facilities are called ‘orgs’ by members, which is short for ‘organisation’).

After the break you can view the video they shot inside the place. This shows just how run-down the interior now is and a few details of interest to Scientology watchers.

After 11 years, a project  the long-promised renovation ofthe building seemed to be under way. The Church of Scientology had controversially obtained planning permission and commenced essential work. Of course, the pandemic intervened, and now the project looks to have been abandoned. Again.

Inside the Royal Fleet Club

The video is in two parts. I’ve set it up below so that it skips the first part and goes straight to the exploration of the Royal Fleet Club. If you want to see the first part just pull back the cursor at the bottom, or visit YouTube direct

You can also download the part concerning the Royal Fleet Club. . I have done this just in case this video is suppressed. When you deal with the Church of Scientology you quickly learn that they will try to remove any online material that they don’t like. Interesting material disappears all the time. If the video is no longer available on YouTube, you can still download it here and watch it.

What Is the Scientology Angle?

At 15:40 as our explorers ascend the stairs, we can see how the building is only a narrow lane and a razor-wire-tipped wall away from the largest military dockyard in Western Europe.

We can expect Scientology to exploit this by reporting anyone who watches their activity to the police for ‘spying’ on the dockyard.

Here’s our first view  of internal graffitti presumably scrawled by less ethical ‘explorers’.  In the video we will see some that mocks Scientology and some neo-nazi references. It’s extraordinary that there has been no attempt to remove any of this. 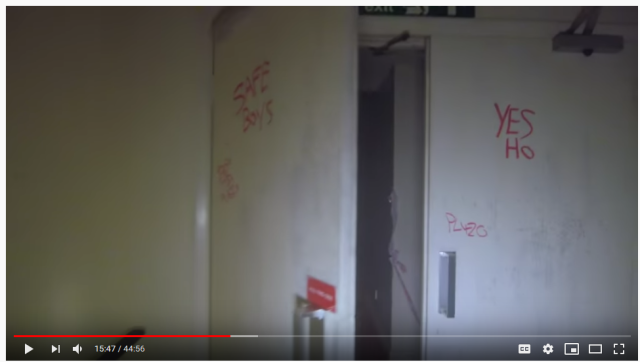 At 16:47 our explorers come across a stash of materials that the org can’t get rid of. I recognise the boxes. Most are “The Truth About Drugs” leaflets, which promote Hubbard’s unbalanced theories about drugs and their mode of action.

These are left over from a pile of boxes that they were supposed to hand out at a Jive Aces concert in Plymouth City Centre. The performers in this group are all Scientologists, and put on gigs for nothing to promote the cause. Unfortunately for Scientology, it chose a location between two multi-storey department stores on the same day that a gale hit Plymouth. They didn’t manage to distribute many leaflets, because the winds made it difficult to walk, let alone dance.

The rest of the boxes in this pile contain DVDs of Hubbard ‘lectures’ (Scientology has yet to embrace downloads) and random unsold books. Some of this stuff will have been replaced by new editions. When this happens, local Scientologists are not allowed sell the old ones, not throw them away. They end up here. 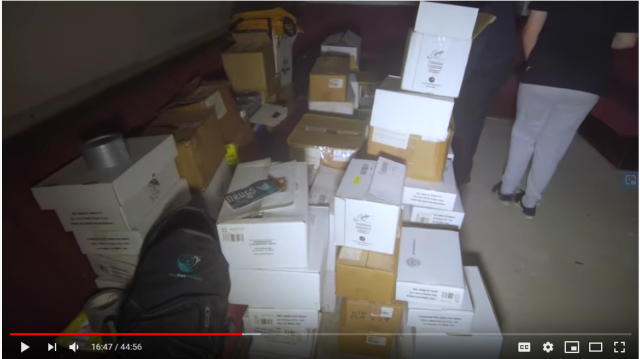 Close by is a collection of collapsible stands for the kind of banners used in trade shows. There are two of these in the window of the Scientology facility in Ebrington Street. They don’t seen to have had a chance to use the rest, so they have dumped them here. 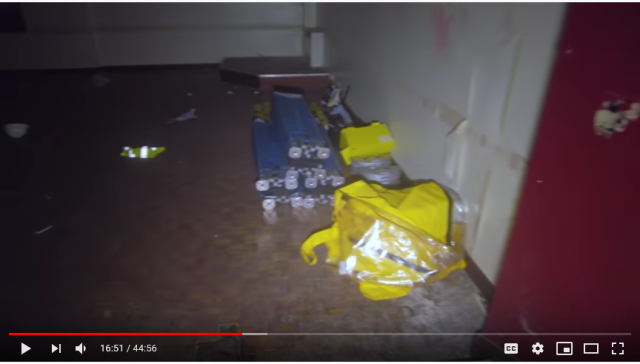 There is also a traditional Scientology pickaxe with the wrong size of handle. Surely not an improvised weapon?

Next we see a lift shaft minus the lift, and a bar stripped of amost every fitting. Then, all the keys for the building are shown on display. Security is apparently not a priority for the owners.

The fundraising theme for the ideal org is “Plymouth Pirates”, and here’s a abandoned pirate hat left over from from one of these ‘events’.

The room next door is a shambles. I’ve been informed by an ex-member that people lived here, and paid rent to the org. It looks as if someone once slept there. It’s a squalid place to stay.

After this, there’s a lot of wandering about corridors and stairs. Watching this, I am awed by how completely the place has been stripped of anything of value. All it seems to have left is crumbing plaster and falling ceilings. Then, incredibly, they come across a working pool table. It’s been the only human touch so far.

Finally, they managed to get the one lift still in place to descend, confirming that the building is still connected to the grid.

The overwhelming impression I get is that the place has been gutted. Anything that can be sold has been, except the pool table, and that’s probably only because it posses proper slate bed, and too heavy for them to shift.

There are many bars in the building. It was designed to accomodate hard-drinking sailors and Royal Marines. The brass fitting used to be a wonder to behold. They are all gone now, sold to keep the existing org open. Features like this, which were of such local historical interest are now irreperably lost.

The interor is showing its 11 years of neglect, too. The plaster on the walls and the ceiling are wrecked, and would cost a fortune to resore.It’s just as well for Scientology that the new design is open-plan, and most of those walls will be taken out. However, the complicated pitched roof , and the flat roofing of the extensions around the back have also suffered from neglect. It will be a more serious matter if the timbers rot away.

I’ll finish with some information:

What is an Ideal Org?

If you scroll back through posts in this blog, you will see that I pay a lot of attention to an empty building. It opened as “The Royal Fleet Club”. It was a place for Royal Navy personnel and Royal Marines to stay while their ships were in the adjacent Royal Dockyard (and kept them away from the temptations of the notorious Union Street).

The dockyard wall, tipped with razor wire, can be seen running behing the building.

Modern transport made the Fleet Club redundant and, after standing empty for some time, it was sold to an etrepreneur who turned it into “The Royal Fleet Hotel”. That business failed, and the structure stood empty for years more until, in 2020, the Church of Scientology bought it.

Scientology facilities are called ‘orgs’ by members (that’s short for ‘organisation’). The current one is i a rented shop in Ebrington Street, miles away from the Fleet Club, andclose by Plymouth’s shopping centre.

The plan was to transform the Royal Fleet Club into an ‘Ideal Org’ – a kind of Scientology mega-church.

It’s hard to understand why. The 2011 census recorded only 28 Scientologists in the whole of the Southwest of England, and the plans for the Ideal Org give permission for occupation by up to 300 people.

The concensus among critics of Scientology is that membership of Scientology has been collapsing for some considerable time. The organisation used to derive its income from the practice of ‘auditing’ and Scientology ‘courses’. These both cost money. Courses start at about £30, but quickly escalate to thousands. 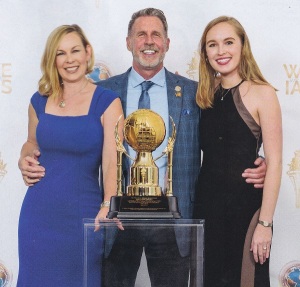 Consequently, Scientology has turned from auditing to direct appeals for donations from members and especially to rich members who donate millions in exchange for garish trophies presented by the present ‘leader’ David Miscavige. These people would not make such huge donations unless they thought Scientology was prospering – and the constant opening of new facilities, even though there is no demand for them, gives rich donors the impression of constant expansion.

This kind of propaganda also reassures the dwindling bands of Scientologists who keep the orgs open. They know that their org is in dire straits, but believe, on the basis of Scientology’s internal propaganda, that all the others are hardly able to keep up with demand and need to grow. Of course, the other orgs are failing, too.

So, opening ideal orgs does not have to make practical sense. They are real estate investment and propaganda toold, looked after by the true believers who staff them for little or no money.

This is why I expected Plymouth’s Ideal org building  to be renovated soon.

However, the pandemic intervened. All but essential building work was stopped when the nation went into lockdown, and that made it impossible to meet the September deadline. This opportunity would not come again for 100 years, so the whole thing seems to have been scrapped, wasting a fortune.

Urban Explorers and the Law 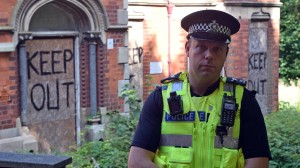 The following  is the impression I get from websites devoted to urban exploration –  not a guide to the law.

If someone enters a building in the UK they will be committing the civil tort of trespass.  The owner of the property can summon the police who can arrest that person if they do not leave by the shortest practicable route. but no crime has been committed by just being there. The explorer might expect to be questioned but cannot be held long without being charged with an offence. Of course, the plan is to get in out without being seen.

Of course, if you leave your door open and find someone in your house, courts will likely take you part if you restrain or eject them with reasonable force, before calling the police. However, if somebody sees you wandering about inside a hospital building that has been abandandoned for 20 years, and you are caught, police have to show reasonable suspicion that you have committed an additional crime and, of course, provide robust evidence to that effect.

To enter a structure legally, the place has to be insecure. If you do damage in order to obtain entry, that is the crimimal offence of ‘breaking and entering’. The offence of ‘criminal damage’ would cover any other violence you might do to the stucture. Ethical urban explorers are conseqently most careful to avoid breaking anything at all.

There is still a civil tort involved, and I understand that that is limited to the value of whatever benefit you derived from being there. I suppose if you trespassed upon a private theatrical performance you might be liable to play for a ticket and costs but the benefit of looking around an old building isn’t worth suing over, so long as you do no harm.

The only thing that disturbs me about the practice is its inherent dangers. People have died and others have been injured. As an example of the risks involved, Scientologists stripped out the oak floorboards in one of the Fleet Club’s function rooms and sold them. Someone could have fallen through if they came upon that room while distracted.

I suppose any leisure  activity is potentially dangerous. However, in the case of the Royal Fleet Club I think the legal risks for a known critic of Scientology (me) outweigh the benefits. When I found the back door to the place was insecure, some months ago, I reported this to the local council, and it was made secure again within a day or two. I didn’t go inside.

Urban explorers will obviously have a different attitude, and I welcome their comments.